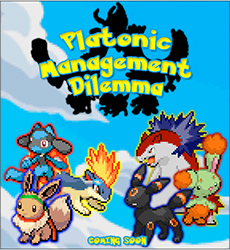 The "coming soon" cover page for Platonic Management Dilemma.
"Warriors from afar... Please, heed my call... My home is in danger, but I grow weak... I will use my power to bring you here, but... That is all I can do. The rest, brave warriors... I leave up to you."
— Mew, setting the events of Perplexing Magnolia Disruption into motion.
Advertisement:

Perplexing Magnolia Disruption and Platonic Management Dilemma, known under the collective title of SMGPMD, is a series of sprite comics by Shard

. The story covers the adventures of Team SMG after they are pulled into the world of Pokémon - specifically, the Pokémon Mystery Dungeon series - and search for a way home while trying to help the Pokémon who live there.

The series is an Affectionate Parody of the Pokémon Mystery Dungeon series, and thus contains several elements from it, while still using its own plot and ideas.

The main characters, as of Platonic Management Dilemma, are:

The SMGPMD series contains examples of: