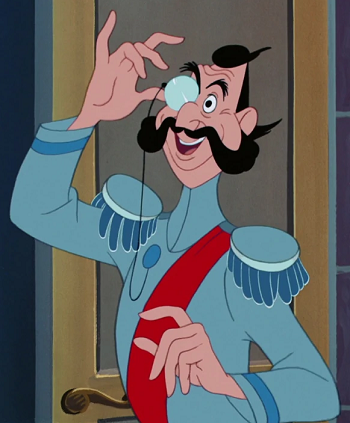 "By Jove, it fits! Now the prince must marry me!"
Leela: I know Fry's rich, but do we really have to wear these top hats?
Bender: Maybe you don't understand just how rich he is. In fact, I think I'd better put on a monocle.
— Futurama, "A Fishful of Dollars"
Advertisement:

Want to give your character a prop that sets him as high as possible in the social strata? Give him a monocle.

Largely obsolete today (it disappeared sometime during The Great Depression of the 1930s, when being conspicuously wealthy was a quick way to get yourself despised)note It's mostly a case of Science Marches On; ophthalmologists stopped prescribing monocles as we developed more sophisticated means to measure refractive error, allowing for better glasses with different lenses for each eye, the monocle is a corrective lens applied to only one eye. In this sense it is no different from eyeglasses. But while eyeglasses have never been anything more than a medical appliance (with the possible exception of the pince-nez), the monocle has been a status symbol virtually since its invention.

They are never seen on the faces of the working class. Instead, they are the exclusive province of titled nobility, high-ranking military officers, upper-level businessmen, academics, and similar members of the social elite. They are also exclusively worn by men — though lesbians in the early 20th century sometimes used them for a subtly masculine edge. Monocles were available to the lower classes, but proper manufacture and fitting made them very expensive. Cheaper versions were of poor quality and very uncomfortable to wear; people needing a corrective lens in only one eye who could not or would not get a monocle would generally opt for a full pair of glasses with a flat pane of glass as the "lens" for the eye not needing correction. This is generally how it is done today (except when the person just goes for contacts).

In media, the monocle's wearer will constantly clean it and fidget with it. It will be whipped out and squinted through when the wearer views something below his social station. In comedies, a monocle will pop off its wearer's face and/or shatter in shocked response to the working class hero giving this pompous toady his well-deserved comeuppance. The monocle is also a popular graffito to draw on a sleeping person's face. Especially in British works, the monocle is associated with old-time German military officers, and its appearance on the face of a German is visual shorthand, depending on whether the war is the first or the second, of a haughty aristocratic Prussian or a Nasty Nazi. Either way it denotes a cold-blooded thinly-disguised psychopath with no regard for human lives lost, so long as Germany wins the war. Monocles and nasty Germans are pretty much synonymous in British works.

Ironically, however, in America the monocle is associated with the English, having a much more neutral stigma and being a core wardrobe piece of the Quintessential British Gentleman.

A trope largely as obsolete as the monocle itself, it still turns up in period pieces and parodies, and is gaining popularity in the Steampunk scene.

The female version is the lorgnette (pronounced to rhyme with "born yet," as numerous songwriters have done), which is a pair of spectacles on a small stick to be held up when you want to look at something. It is a common property of the Grande Dame.

Given its association with wealth and status, it's a very popular prop for the Mock Millionaire and the Wicked Cultured villain. Today, putting a monocle and top hat on anything is sure to get a laugh just out of the pure absurdity.note Unless you go by the name of John Bain. Sub-trope of Stock Costume Traits.

The monocle may be making a small comeback in the 21st century as a way for people to check their phones without having to fumble for reading glasses, as they can hold the phone in on hand and the monocle in the other. Whether this will catch on remains to be seen.

See Classy Cane for another stock item of the upper class.