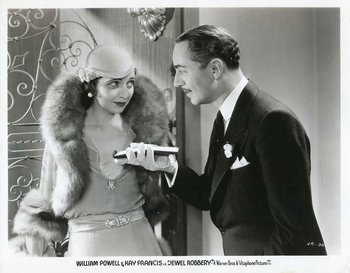 Jewel Robbery is a 1932 comedy film starring William Powell and Kay Francis. It was directed by William Dieterle and has many tie-ins to a movie from the same year called Trouble in Paradise, most likely being its spiritual successor, but is the most remembered from audiences, to the point of being one of the most iconic movies from Hollywood's pre-production code era.

Like many movies of this time, Jewel Robbery is set during The Great Depression. It follows a pampered baroness named Teri (Franis), who lives in Vienna with her husband Baron Franz von Horhenfels. She enjoys getting jeweled presents, but wants more in life instead of her boring marriage, and even becomes excited over scandalous stories in the newspapers. When she visits the jewellery store with her husband, he haggles at a price for an expensive Excelsior diamond, just as the store has been targeted by jewel thieves.

The store is robbed by a sophisticated robber (Powell) and his gang of many gangsters, who terrify Baron Franz, but not his wife Teri, who becomes smitten over the leader of the thieves and admires his power over his men, and becomes indecisive over turning him in to the police.