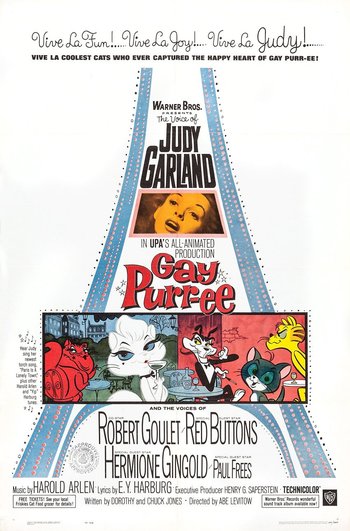 Gay Purr-ee is a 1962 Animated Musical produced by United Productions of America (UPA) and distributed by Warner Bros.. It was UPA's second and final feature, as well as their only one not to be an adaptation or to feature any of their stock characters.

It was co-written by Chuck Jones and his then-wife Dorothy and directed by Abe Levitow, one of his star animators. Jones's involvement in the production would end up costing him his job at Warner Bros. for violation of contract, and while probably not the reason the studio's animation department closed the next year, losing such a legendary creator couldn't have helped.

Mewsette (Judy Garland in her only voice-acting role) is a French farm cat who yearns for a more fabulous life while Jaune-Tom (Robert Goulet), her sweet but simple Love Interest, is content to live out in the country. She hops a train to Paris where she meets con-cat Meowrice (Paul Frees) and is taken by his promises to introduce her to society (unaware that he plans to sell her to a rich American as a mail-order bride). Jaune-Tom and his pocket-sized sidekick Robespierre (Red Buttons) go to Paris in search of her, and adventure ensues.

Also notable as one of the last collaborations for the Wizard of Oz songwriting team of Harold Arlen and E.Y. "Yip" Harburg, who were hired for this film at Judy Garland's suggestion.

In spite of Garland's involvement the film is now less well remembered than a certain other musical cartoon about French cats.