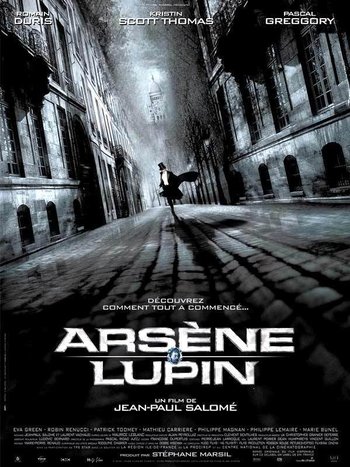 Arsène Lupin is a 2004 crime thriller film and an adaptation of the classic Arsène Lupin stories. It was directed by Jean-Paul Salomé and stars Romain Duris as Lupin, Kristin Scott Thomas as Joséphine, Pascal Greggory as Beaumagnan, and Eva Green as Clarisse de Dreux-Soubise.

The film follows Gentleman Thief Arsène Lupin from a small boy, through the death of his father, and his adult years when he meets a strange woman, Joséphine, who appears to be immortal and uses a hypnotic drug to enslave people to her will. Arsène's ethos is to steal from the rich and deserving crooks. He comes up against two parties, a secret society and Joséphine herself, who are intent on gathering three crucifixes which will reveal the secret of a lost treasure.

The film does its best to incorporate a lot of Lupin lore, despite there being enough for a saga-with-the-final-movie-in-two-parts, but in a way where it steals bits and pieces of important plots from across the literary canon to weave into its focused narrative.

Compare the 1932 Hollywoodian film of the same name.