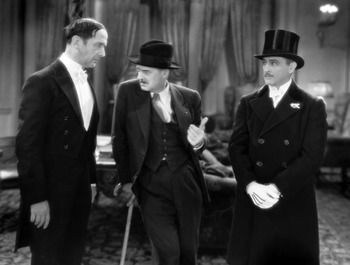 It is, yes, an adaptation of the popular French literary character Arsène Lupin, gentleman thief, and specifically a 1907 play. John Barrymore is the Duke of Chamerace, a French nobleman who may or may not be Arsène Lupin, but who is definitely deep in debt. Lionel Barrymore is Detective Guerchard of the French police, who is certain that Chamerace is indeed Lupin. The case of Lupin has become a major scandal in France and Guerchard's boss has demanded that he catch Lupin in a week or he's fired.

A dim-witted war profiteer named Gourney-Martin not only doesn't think that Chamerace is Lupin, he has even invited Chamerace to his country estate to make sure that Arsène Lupin doesn't rob it. Before going off on vacation the duke holds a lavish party at his (heavily mortgaged) mansion. There he meets a lovely White Russian countess named Sonia (Karen Morley). They hit it off and Chamerace invites Sonia to go to the country with him. What Lupin doesn't know is that Sonia is a police plant, sent by Guerchard.

First of five films the Barrymore brothers made together, others of which include Dinner at Eight (where they don't share any scenes) and Best Picture winner Grand Hotel. Compare 2004 French film Arsene Lupin.