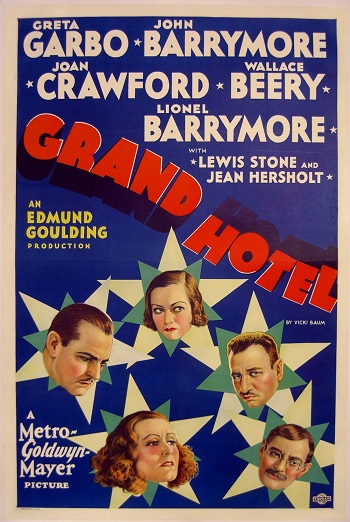 Adapted from Vicki Baum's novel, this 1932 MGM film was directed by Edmund Goulding and featured an All-Star Cast that included Greta Garbo, brothers John and Lionel Barrymore, Joan Crawford, and Wallace Beery. It tells the intertwining stories of the various guests who check into Berlin's famous Grand Hotel (based on the Real Life Adlon Hotel):

This film is probably the first true All-Star Cast film ever made, featuring most every A-lister in the MGM lineup. Grand Hotel won the Academy Award for Best Picture, without even being nominated for any other Oscars, the only time this has ever happened.note At least part of the reason is that there was no clear lead actor or actress, and there were no supporting acting awards at the time. Contains the Signature Line of Garbo's whole career—"I want to be alone."

Followed by a Spiritual Successor, Dinner at Eight, which not only featured a similar narrative structure but had several of the same actors playing similar parts. It was remade in The '40s as Weekend at the Waldorf, starring Lana Turner. A musical adaptation went to Broadway in the late 80's and early 90's, later adapted by the Takarazuka Revue. Vicky Blum later wrote a sequel to the book, Hotel Berlin, which was also adapted into a film, Hotel Berlin.

Not to be confused with Gran Hotel which shares the same English-language title, or The Grand Budapest Hotel, which doesn't.

Tropes found in the musical: