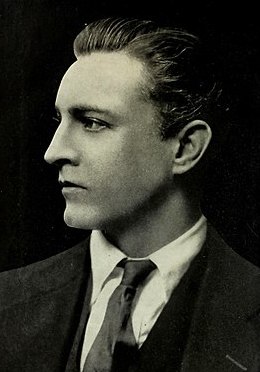 John Barrymore, born as John Sidney Blyth (mid February note It's debated that the day of his birth was either the 14th or the 15th 1882 — May 29, 1942) was an American actor that appeared in films, radio shows and in theatre, also known for being a part of the Barrymore acting dynasty along with siblings Lionel and Ethel. He began as a Shakespearean Actor and his portrayal of Hamlet was called one of the best performances of the character of all time.

He left the stage to appear in silent films and moved into the sound films successfully: three of his sound films are in the National Film Registry. Barrymore was said to be idolized as one of the most influential actors of his time and had a "great profile"; however, he was an alcoholic and had married four times, and later went bankrupt. It influenced his later roles of being The Alcoholic character, but his drinking became so severe he had to rely on it between filming takes.

Barrymore died from liver cirrhosis and pneumonia. His corpse was said to have been stolen before burial by Raoul Walsh in order to prank Errol Flynn. (Flynn later played Barrymore in the film Too Much, Too Soon, shortly before he also died of alcoholism.) Barrymore's granddaughter Drew carried on the family tradition of acting.