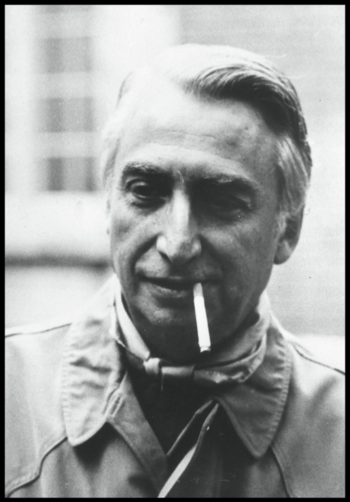 Roland Barthes (November 12, 1915 — March 26, 1980) was a French literary critic, but that doesn't quite sum up his achievement. He was also an academic, a journalist, a theorist, a connoisseur of ideas, a polemicist, an autobiographer, a writer about photography, a diarist and one of the greatest 20th century French authors, even if — and partly because — a good part of his legacy is tied up with his suspicion of the whole concept of 'author'.

He was born in Normandy into a Protestant family (which, in mostly Catholic France, went some way towards explaining his lifelong sense of not-quite-belonging) and his father, a naval officer, died in a sea battle in World War I before young Roland was even one year old. As a result he was raised by his mother, to whom he was devoted. He was a star student, but as a young man he got tuberculosis and spent a lot of time inside various sanatoria. This kept him from doing miltary service during World War II, but being excluded from the normal career path for a French academic meant that he had to travel a lot to get teaching positions.

Like pretty much every major French intellectual of his generation, Barthes' political allegiances were on the left, and among his earliest publications were some to the political magazine Combat. His first book, Writing Degree Zero, was a study of how even an apparently neutral style of writing carries political implications that the writer may not even be aware of. In the early 50s, he began to write a series of essays for Les Lettres Nouvelles, in which he analysed different kinds of modern 'myth'; these were subsequently published as Mythologies, and are probably Barthes' single most influential work in that every cultural journalist these days has adopted some of Barthes' language and loves to "debunk" the "myth" of this or that, although Barthes' own practice is somewhat subtler and more sophisticated.note Specifically, Barthes doesn't use "myth" to mean "lie", the way you sometimes get conservative journalists or politicians talking about e.g. "the myth of climate change" or whatever, when they want to claim that there's some sort of conspiracy going on. He defined myth as "a type of speech" and pointed out that myths can be technically true, but whether or not they're true is less important than how they're used, and he brought up a classic example of a Barthesian myth: a photo published in a French news magazine during the Algerian War, of a black soldier in the French army patriotically saluting the flag. While it was technically true that there were black soldiers in the French army, to publish a photo like that while people in Algeria were waging war against French colonialism was transparently an attempt to depict the French nation as transcending mere local squabbles, and to claim that, ultimately, France was united, black and whites alike — which was obviously untrue. Barthes's idea of "myth" has something in common with the American philosopher Harry Frankfurt's concept of bullshit

More broadly, Mythologies was very influential on the field of cultural studies, especially after the first English edition appeared in 1972, popularizing the use of semiotics and Saussurean terminology in analyzing contemporary culture.

In the 1960s he began to explore the new theory of structuralism, and wrote structuralist studies of classic French literature, one of which, On Racine, attracted the criticism of a well-known professor of French. Since the French like nothing better than a good cultural controversy, the reputation for being an uppity young Turk did Barthes no harm at all (in spite of the fact that he was in his late 40s, at this point) and it helped turn him into a major figure in France's cultural pantheon. It was around the late 60s that he began to be translated into English.

No sooner had Barthes got the hang of structuralism than he moved beyond it; his 1967 essay "The Death of the Author" has been widely regarded as being a foundational text, insofar as there can be any, of post-structuralism, and S/Z, his 1970 book-length deconstruction of a single short story by Balzac, was perhaps the moment when post-structuralist literary criticism came of age.

In the 70s, Barthes began to write more personal works. Roland Barthes is a very strange but highly readable autobiography, arranged by theme rather than in chronological order; A Lover's Discourse: Fragments is an investigation of what it's like to be in love with someone. (Barthes was gay, and some of his most intimate writing is about his relationships with people he was more or less unhappily in love with.)

His most moving book was his last one, inspired by the death in 1977 of his mother: Camera Lucida is ostensibly a study of photography but it's really about memory and loss.

He died in 1980, from injuries sustained after being hit by a laundry van in the streets of Paris. His death was widely mourned by the likes of Susan Sontag and Italo Calvino.