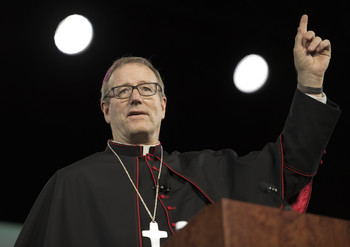 Love is willing the good of the other as other.
"Paul announces Jesus Christ risen from the dead. And [the text] says 'Most people laughed at him and walked away.' Welcome to YouTube!"
Advertisement:

Robert Barron is the Auxiliary Bishop of the Archdiocese of Los Angeles and an aspiring YouTuber.

As the leader of Word on Fire ministries, Bishop Barron has sought to answer John Paul II's call for a new evangelization by using online mediums like Web Video and Podcasts to reach people who he could never reach from the pulpit. To attract these audiences, Bishop Barron comments on notable events in political, intellectual, and, most importantly for the purpose of this page, popular culture. In his videos, podcasts, and articles dealing with media, Bishop Barron often delves into what are essentially conversations on tropes in the context of their relationship to Christianity and The Four Gospels.

, where he posts many commentaries a year that are about ten minutes long on a variety of topics. He also co-hosts a podcast with Brandon Vogt, "The Word On Fire Show

," where the two of them discuss the role of the Church in the modern day. He also has the Word On Fire website to host his articles