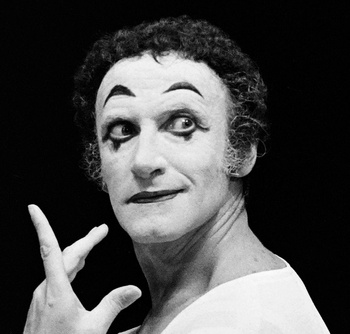 They might say Everyone Hates Mimes, but that never applied to this guy.
Advertisement:

Marcel Marceau (real name Marcel Mangel, 22 March 1923 – 22 September 2007) was a French mime artist, actor and dancer. He was without a doubt the most iconic and influential figure in the art of mime, which he called "The Art of Silence".

Born in Strasbourg in a family of Polish Jews who moved to France, he was fascinated by Charlie Chaplin's silent movies as a child. He lived in hiding and worked with the French Resistance with his cousin Georges Loinger during most of World War II ("Marceau" was his Code Name), taking up mime to entertain Jewish children that he helped smuggle to Switzerland (and to keep them quiet as well in order to not attract German soldiers or Vichy French police patrols), saving them from The Holocaust (which claimed his father, who died in Auschwitz). He gave his first major performance to 3000 Free French and American troops after the Liberation of Paris in August 1944. Once the war ended, he studied dramatic art and mime in Paris.

Marceau codified a lot of modern mime, finding inspiration in Kabuki Theatre and Commedia dell'Arte to breathe new life into the art form and subsequently elevating it to the level of high culture. He created his trademark character of Bip the Clown in 1947, as well as his pantomime company that same year, which found success with tours in France and worldwide in the 1950s, 1960s and 1970s. He founded his school of pantomime in Paris in 1978, which closed in 2005.

He was friends with Michael Jackson, who acknowledged taking him as inspiration for some of his dance choregraphies. He also made a few film appearances, most notably in Barbarella and As Himself in Mel Brooks' Silent Movie. Jesse Eisenberg portrayed him in 2020's Resistance, a biopic about his life during World War II.

No relation to actress Sophie Marceau, who also took "Marceau" as Stage Name.

Tropes about his performances: