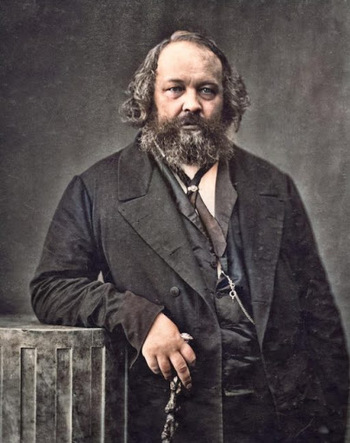 "Do you want to make it impossible for anyone to oppress his fellow-man? Then make sure that no one shall possess power."
—Mikhail Bakunin

Mikhail Alexandrovich Bakunin (1814-1876) was a Russian political philosopher, revolutionary, and labor activist and is one of the foremost figures in modern Anarchism and the one who first developed modern Anarcho-Collectivism. Born to a lesser noble family in Tsarist Russia, young Bakunin quickly found that the privileged life of a nobleman was not for him, instead swiftly radicalizing first to Communism, before eventually developing his own anarchistic principles which he eventually put down in his seminal work God and the State as well as several pamphlets and articles written in the last years of his life. However, Bakunin was not just a theorist but also took direct roles in several armed insurrections in Europe throughout his life, for which he was imprisoned in the Peter and Paul Fortress, and later the Shlisselburg Fortress dungeons, in his native Russia and made him persona non grata among the leadership of Europe. Eventually, time and the lingering health issues caused by his imprisonment led to Bakunin retiring to Switzerland where he died of old age in 1876.

Politically speaking, Bakunin is most famous for his development of what would become the basis of Collectivist Anarchism, as well as his bitter rivalry with his former ally and fellow Communist Karl Marx. Indeed, it is the division between Bakunin and Marx, including the former's expulsion from the First International by Marx and his allies, is what drove a permanent wedge between Anarcho-Collectivists and Statist Revolutionary Socialists with the latter becoming the mainstream revolutionary view after Anarchism's decline in the later nineteenth century. However, as Anarchism sees a resurgence in popularity in the twenty-first century, Bakunin's ideology is being consumed by a new generation of radicals and may yet foment a new wave of Anarchist revolution.

For more on Bakunin, see The Other Wiki here

Tropes that applied to Mikhail Bakunin: