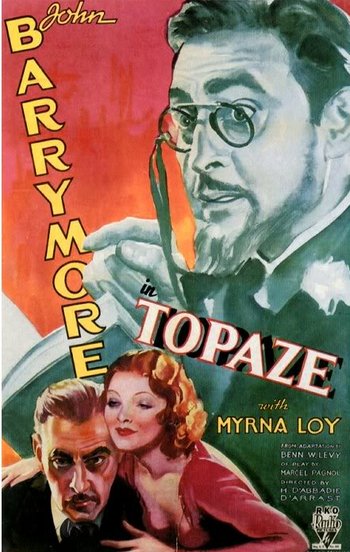 Topaze is a 1933 film starring John Barrymore and Myrna Loy. Barrymore is Professor Topaze, a chemist who is making a rather poor living as a schoolteacher in France. Topaze is fired when he gives bad grades to a rotten little brat named Charlemagne de La Tour-La Tour, the snotty son of rich mineral water manufacturer Baron de La Tour-La Tour. However, he immediately gets a job working for the Baron, as a chemist charged with creating healthy, invigorating mineral water. What the professor does not know is that he is an unwitting pawn in a marketing scam. Instead of selling the excellent water that Topaze is creating, the Baron is selling tap water that "teems with microbes". The other thing that Topaze does not know is that Coco (Loy), the attractive woman who brought Topaze to the Baron and assists him in the laboratory, is actually the Baron's mistress. When Topaze finds out that he has been duped, he is crushed—but he gathers himself, and winds up getting his revenge.

Topaze is a notable film from The Pre-Code Era, in which adultery is casually accepted, evil is not really punished, and the good guy turns bad (sort of). The National Board of Review proclaimed it the best film of 1933. Three years later, after The Hays Code began to be strictly enforced, this film was denied a re-release.