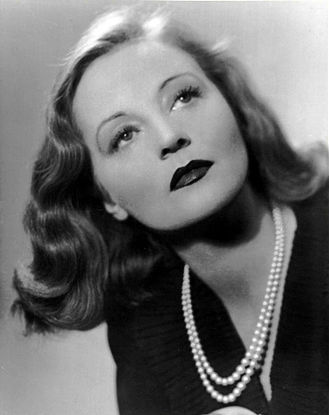 "Acting is the laziest of the professions. A ballet dancer must limber up two or three hours a day, working or idle. The great musicians practice three or four hours a day, willy-nilly. Opera singers must go easy on cigarettes, learn half a dozen languages. The demands on an actress consist in learning the role, interpreting to the best of her ability the intent of the author as outlined by the director. When not on stage? She sits around chewing her nails, waiting for the telephone to ring."
Advertisement:

While she made many appearances in films and on television during her career, Bankhead is mostly credited as a stage actress, one of the greatest of the 20th century. Her characters tended to be Ms. Fanservice deadpan snarkers, and her persona has been imitated and parodied as much as Mae West's. Most notably, Bankhead's family were prominent in American politics and Tallulah herself was often vocal about politics as well,note Bankhead's father, William, was a longtime Congressman from Alabama who was Speaker of the House from 1936 until his death in 1940 being supportive of the Civil Rights Movement. Although she acted a lot during The Pre-Code Era and The Golden Age of Hollywood, her most successful screen role was in Lifeboat. She also memorably appeared as herself in an episode of the The Lucy-Desi Comedy Hour.

Bankhead married once and had no children but debates on her sexuality have existed from since her death. She was said to have had a reputation of The Casanova, but there have been many arguments that she also went with women as well. They didn't stop rumours when Bankhead reportedly said that she was "ambi-sextrous". Much of her maneating reputation made her a public enemy with The Hays Code, which apparently had a list of actors that needed to either be censored or banned from acting, and Bankhead was at the top of it.

Known for her smoking, Bankhead died in hospital from respiratory issues, as well as malnutrition, the flu, and "double pneumonia". Her final words (from what could be made out by staff) was said to be a request for codeine, followed by a bourbon whiskey.

Blanche DuBois was said to have been inspired by her. She's portrayed in Z: The Beginning of Everything (about Zelda Fitzgerald) by Christina Bennett Lind.