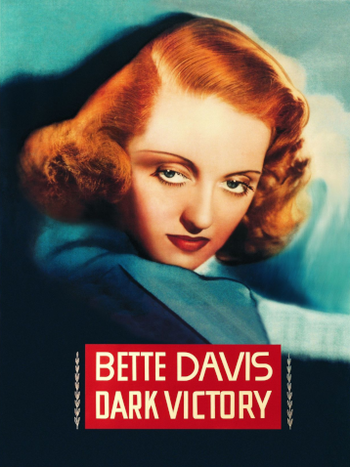 Davis plays Judith Traherne, a wealthy, carefree, hard-partying Long Island socialite who becomes far less carefree when she starts suffering from severe headaches, blurred vision, and dizziness. Pressured by her secretary/assistant Ann (Geraldine Fitzgerald), Judith finally goes to see neurosurgeon Dr. Frederick Steele (Brent). Diagnosing her with a malignant brain tumor, Dr. Steele performs surgery, which relieves the symptoms that sent Judith to him but unfortunately cannot cure her condition, leaving her with less than a year to live. Dr. Steele and Ann decide not to tell Judith about her diagnosis. Meanwhile, Judith and Dr. Steele fall in love.

Adapted from a 1934 play of the same name (which featured Tallulah Bankhead as Judith), Dark Victory was a critical and commercial hit for Davis and Warner Bros. Humphrey Bogart, playing Michael, the Irish manager of Judith's stable of horses, is billed third. Bogart had been a character actor for years with Warner, and would not break out as a star until High Sierra and The Maltese Falcon in 1941. Even more interestingly, none other than future President Ronald Reagan is billed fifth, playing Alec, one of Judith's Long Island society pals. This part was an early-career highlight for Reagan, who spent most of his time at Warner Bros. in B-movies.