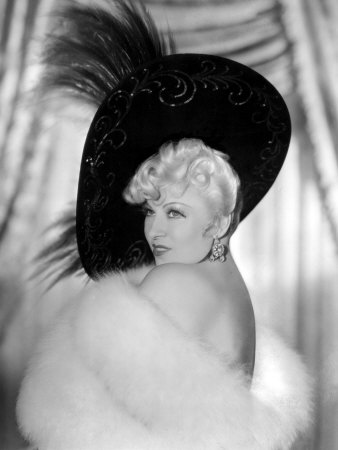 Mae West (August 17, 1893 — November 22, 1980) was one of the most iconic and unlikely sex symbols of the early 20th century. Famous for her hourglass figure, sensual voice and cheeky Double Entendre she also became one of the most controversial film actors of all time.

Starting off — like most stars in her time — in vaudeville, she rapidly became notorious for her sexually risqué singing style. Her Broadway play, Sex (1927), caused so much scandal that the police arrested her and the entire cast. She barely spent a few days in jail while the press elevated her to national fame. Her next play, The Drag (1928) was never staged because the Society for the Prevention of Vice took offense of its homosexual themes.

By the time she became a movie star she was already 38 years old, but became an overnight success. Classic films like Night After Night (1932), She Done Him Wrong (1933), I'm No Angel (1933), Klondike Annie (1936) and My Little Chickadee (1940) featured West intimidating her co-actors with her witty and sexually risqué wisecracks and double entendres. She played the same part when appearing on radio shows. Salvador Dalí designed a wood and satin sofa after her lips and during World War II Allied aircrew units called their inflatable life preserver jackets "Mae West", due to its resemblance to her bosom. Fashion Designer Elsa Schiaperelli formed the bottle for her perfume, "Shocking", after Mae's curvaceous dress form; a reference to her own reaction at seeing the form after it was delivered for custom dressmaking. She is even featured on the cover of The Beatles Sgt. Pepper's Lonely Hearts Club Band album.

Later in life Mae West tried her best to keep her status as former sex symbol, despite looking nothing like it anymore. She recorded a few rock 'n' roll albums and even appeared in a few Cult Classics like Myra Breckinridge (1970) and starred and wrote the very campy Sextette (1978).

She was a talented writer, who wrote her own Broadway plays as well as the screenplays to most of her movies.

She was immortalized in the "Four Ladies of Hollywood" monument at the western end of the Hollywood Walk of Fame, along with Dorothy Dandridge, Dolores del Río and Anna May Wong.

Not to be confused with Debi Mae West.