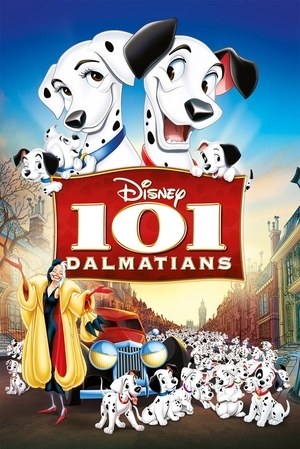 They get the other 84 puppies after adopting them.
"Cruella De Vil, Cruella De Vil
If she doesn't scare you, no evil thing will
To see her is to take a sudden... chill
Cruella... Cruella...
She's like a spider waiting for the... kill
Look out for Cruella De Vil"
— Roger Radcliffe, "Cruella De Vil"
Advertisement:

Entry #17 in the Disney Animated Canon, The Hundred and One Dalmatians was adapted for animation by Walt Disney Pictures as One Hundred and One Dalmatians.note Usually promoted with the Arabic numeral as 101 Dalmatians. The second Disney animated film to be set unambiguously in contemporary time period (the first one was Dumbo), this 1961 production was also the first to use xerography to ease the inking process and make a film with this much technical complexity (the 101 dogs and their collective innumerable spots) possible. Unfortunately, financial setbacks at the studio, especially in the wake of Walt Disney's death in 1966, made the process the norm and the technique, now dubbed Disney's "scratchy outline" period, plagued the studio's features for 16 years until technological improvements allowed for softer xeroxing on The Rescuers.

Although the original children's novel is far less remembered than the Walt Disney movie based on it, (and it had a sequel, too), this is one of the most faithful adaptations Disney has ever done.

It was followed by several sequels and spin-offs in different media beginning in The '90s. These works are listed on a separate franchise page.

The Disney version got a direct-to-video animated sequel in 2003 in 101 Dalmatians II: Patch's London Adventure, in which Pongo and Perdy's son Patch is accidentally left behind when the family moves to the country, and feeling unappreciated, goes to find his idol Thunderbolt to be on his show.

The Disney Adaptation (1961) provides examples of:

Pongo is trying to arrange a Meet Cute between Anita and Perdita, and resorts to this, dragging Roger along.

Example of:
Dog Walks You

Alternative Title(s): One Hundred And One Dalmatians 1961

Pongo is trying to arrange a Meet Cute between Anita and Perdita, and resorts to this, dragging Roger along.