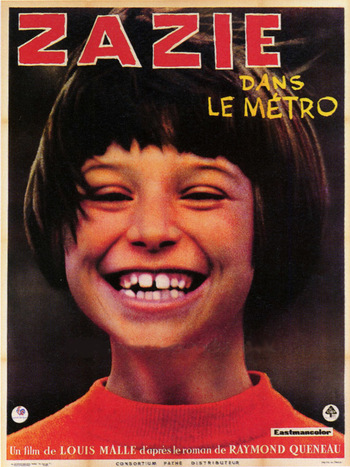 Zazie dans le Métro is a 1960 film from France directed by Louis Malle.

A middle-aged man named Gabriel (Philippe Noiret) comes to the train station in Paris. His sister Jeanne is visiting the city from somewhere else to have a weekend of sex with her lover, so she dumps her daughter Zazie (Charlotte Demongeot), approximately ten years old, in Gabriel's care for the weekend. Zazie, as it turns, out, is a proto-Bart Simpson from France, with a foul mouth and a highspirited attitude who delights in insulting her neighbors. Her one goal in her weekend visit with her uncle is to ride the Paris Metro...but it's on strike.

A weekend of comic adventures ensues. The wacky plot incidents that occur over Zazie's madcap visit include: a horde of German groupies who chase after Gabriel, a comically ineffectual pedophile (really), a chase scene that's essentially a live-action Tex Avery cartoon, and a bar brawl. The entire film is nonstop surrealism.