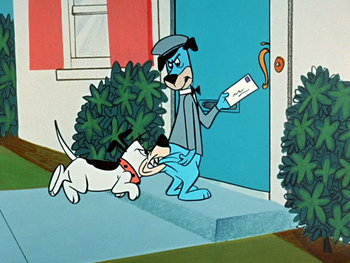 It's a dog-bite-dog world out there.
"Bitten in ze butt!
Got an awful tear!
Took a little nibble from my derriere!
I will get you in ze end, dog!
You'll regret you bit me, chum!
Ooooh, I am so irritated I got bitten in ze bum!"
— Tritesse, "Les Miseranimals", Animaniacs
Advertisement:

Animals are one of nature's beauties of the earth. Some are cute and cuddly while others can be rather shy. However, there's this kind of animal, the biting kind that can literally bite you on the butt if you're not careful.

This breed of animal is what's known as a Butt Biter; they can be dogs, cats, pigs, ferrets, any other animal you can think of. The next time you come across this type of animal, beware. If the biter is venomous then woe betide the friends who have to Suck Out the Poison.

Often results in the butt-biter making off with a piece of trouser fabric, leaving a hole behind through which Goofy Print Underwear may be visible. A much less violent variant is someone getting their pants pulled down by a biting animal, often while attempting to escape.

Usually happens to men, but women are not immune to this.

Subtrope of: Amusing Injuries, Joke of the Butt, Literal Ass-Kicking, and Pain to the Ass.

Compare: Animals Hate Him, Rump Roast, Shot in the Ass and Thumbtack on the Chair. Is likely to cause a Pain-Powered Leap. Can often happen to a Naïve Animal Lover if they're too naive. Has nothing to do with Beavis And Butthead, even though one of Butthead's favorite insults was "buttmunch."

When Tritesse noticed his cats escaped, he caught Rita. And suddenly, Runt bites him in the butt.

When Tritesse noticed his cats escaped, he caught Rita. And suddenly, Runt bites him in the butt.