Tabletop Game / Rise of the Kage 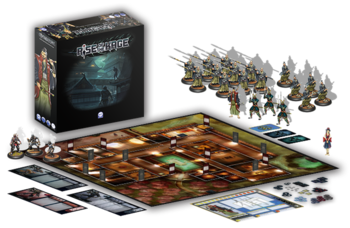 , set in the world of their tabletop wargame, Bushido. It depicts the clandestine operations of the Ninja of the Kage Kaze Zoku (Shadow Wind Clan) as they seek to undermine the authority of the Takashi family, the samurai rulers of the Jwar Isles.
Advertisement:

Gameplay is asymmetric, with one to three players taking on the role of the Kage Kaze Zoku ninja and one player controlling the Takashi family guards. In general, the ninja's task is to move around the map, sneaking past or quietly eliminating guards and gathering the resources they need to complete their mission, which is unknown to the guard player. The guards' job, naturally, is to eliminate the ninja before they complete their nefarious task. If the ninja lack subtlety, competence, or luck, they will generate Noise, which both advances the time track and increases the general level of alarm, as well as giving the guard player more resources with which to recruit and activate Mooks, Elite Mooks, and eventually the samurai in charge of the guards.

Rise of the Kage was funded by a successful Kickstarter