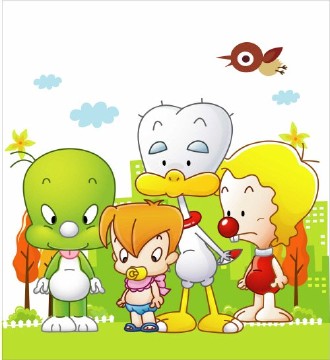 Dooly The Little Dinosaur is a South Korean comics character created by Kim Soo-jung. Dooly was later adapted as an animated series in 1987note By Hanho Heung-Up with assistance from AKOM, Shin Dong-heon Productions, and Sam Young Animation, with a new series in 2008note  animated by Dong Woo Animation. The official site can be found here.

Dooly is a baby dinosaur who got magical powers after aliens kidnapped and experimented on him. He was sent back to Earth, but got trapped in a glacier for 100 million years; when the glaciers retreated, he found his way to Seoul.

In Seoul, he's found by a girl named Younghee, who thinks he's a doll and takes him home with her. He lives with her elder brother Chulsoo, and her father Kildong. Kildong hates Dooly and beats him whenever Dooly annoys him.

Despite being a dinosaur, Dooly is a mischievous kid who likes to eat and play, is loyal to his friends, and who misses his mother. He is always biting his tongue. He doesn't know why the aliens gave him superpowers, or quite know how to use them deliberately, but in times of danger he is able to use them. He does this by pointing his right finger and yelling, Hoihoi!

Dooly has four friends who Kildong also hates and beats (except Heedong).

Dooly the Little Dinosaur has examples of: