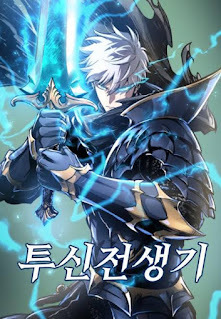 Doom Breaker is a manhwa written by Cheong Dam aka Blue-Deep. Its alternate titles are Reincarnation of the Suicidal Battle God, To a New Life, A Battle God's Second Chance, and 투신전생기. It is available in English on Webtoon

and in Korean on Naver

Zephyr is the last human fighting evil in a world abandoned by the gods. When he is killed in battle by Tartarus, the god of destruction, all hope for humanity seems lost. But Zephyr’s fate is not sealed — the gods who find his battles entertaining have gifted him [[Reincarnation a second chance]] at life, as he is sent ten years into the past, back to when he was a slave instead of the most powerful human alive. Can Zephyr get his revenge against Tartarus and save the woman he loves, or is he doomed to repeat the past?

The story is currently on Hiatus following the conclusion of the first 60 Chapters, referred to by the author as 'Season 1'.