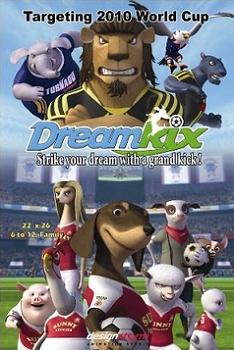 Dreamkix is a 2010 South Korean All-CGI Cartoon produced by Designstorm Animation Studio and produced in English to promote the 2010 FIFA World Cup in South Africa. Dreamkix concerns the Sunny Farm F.C., a farmyard-based football/soccer team training hard and winning games in hopes of joining the Dream League, an international football organization that features many of the greatest football teams on Earth. Led by a Dachshund named Roy, this team of farmyard misfits learn to overcome their disadvantages and win games in the process.

Although twenty-six episodes were produced, only eleven aired. It aired in English on the Disney Channel (Southeast Asia).