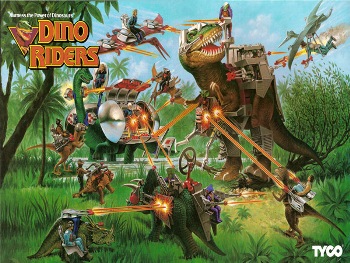 That is awesome.
Advertisement:

The home planet of the Valorians, a peaceful race of somewhat elven telepathic humans, has been conquered by an evil race of lizard-, frog-, bug-, and fish-men called the Rulons. Four hundred Valorian survivors use an experimental Time Travel device to go back in time and escape, but they inadvertently drag a Rulon ship back with them. Stuck in prehistoric times, they fight each other by strapping lasers and BFGs to dinosaurs.

Truly an awesome sight to behold.

Originally airing in First-Run Syndication (as part of the Marvel Action Universe block), the show is best known today for being the benefactor of Memetic Mutation. The dinosaur toys were eventually recycled (stripped of their armor) as a series of straight, though articulated, dinosaur models (they were even endorsed by the Smithsonian Institution). Compare Dinosaucers, Extreme Dinosaurs, DinoZaurs, Dinosaur King and Dino Squad for more fun with dinosaurs.

Recently, it has been revealed to be in talks for a Live-Action Film adaptation, hoping to compete with Transformers.