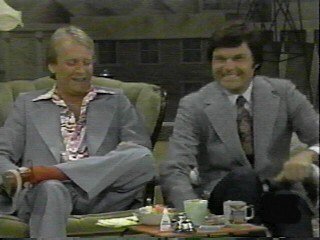 Fernwood Tonight (sometimes stylized as Fernwood 2 Night) is a satirical Talk Show parody that was created by Norman Lear in 1977 as the second spin-off of Mary Hartman, Mary Hartman.

Ostensibly broadcast from the fictional town of Fernwood, Ohio, the show is hosted by Barth Gimble (Martin Mull), a leisure-suited Smug Smiler (who may or may not be evading extradition to Florida). Jerry Hubbard (Fred Willard) is the clueless announcer and co-host who always manages to say exactly the wrong thing at the wrong time. The show ran five nights a week in first-run syndication for a total of 65 episodes. The following year, it was retooled as America Tonight.