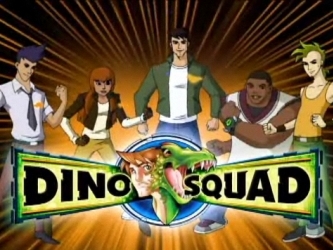 After somehow becoming immortal and surviving the extinction of their species by hiding out in a cave for millions of years, two velociraptors emerge with the ability to turn into humans. One becomes Corrupt Corporate Executive Victor Veloci and schemes to use some kind of mutating formula to "genetically reconstruct all life forms and turn them back into what they rightfully should still be: dinosaurs!”

The other raptor mentors a group of five teens who've been given the ability to change into Stock Dinosaurs at will, trying to help them save the world from Veloci's incredibly ill-conceived plans.

Not to be confused with Street Sharks, Extreme Dinosaurs, Dinosaucers, Dino-Riders, or Kung Fu Dino Posse.

The show originally aired on CBS' KEWLopolis (really) block from September 2007 to September 2009, when Cookie Jar Entertainment (who acquired DiC a year earlier) decided to drop the show from the line-up due to the company wanting to de-emphasize the amount of DiC shows on the roster and re-naming the block Cookie Jar TV. However, in April 2010, the show returned to the airwaves as part of Cookie Jar's syndication packages.