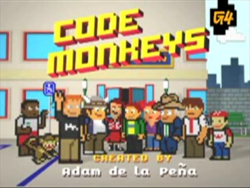 Code Monkey like you... (I love you, whores!) note From left to right: Black Steve, Dave, Todd, Clare, Jerry, Mary, Mr. Larrity, Dean, and Benny. Not pictured: Clarence and "that Asian-looking guy".
Advertisement:

In the early 1980s, The Golden Age of Video Games, men were men, women were women, and "high-end graphics" were ones in which the sprites were more than one color.

This is the setting for G4TV's animated Sitcom Code Monkeys, which revolves around the antics at Game-A-Vision, a fictional video game company. Aside from Jerry, an amiable everyman game programmer who's more than a bit of a pushover, Jerry's mischievous, obnoxious friend and stoner Dave, and Mary, the put-upon sole female programmer, most of the crew at Game-A-Vision are crazy, stupid, sadistic, or some combination. There's Mr. Larrity, a hot-headed, money-grubbing, borderline insane Texas millionaire who becomes Game-A-Vision's owner in the premiere episode and shows a fondness for wildly complicated schemes; Mr. Larrity's dimwit jock son Dean; Todd, a fat, narcissistic, and often creepy uber-geek; "Black Steve", the ill-tempered accountant and token black guy; Clarence, the outrageously gay audio designer who always talks in a sing-song voice; Clare, the flirtatious receptionist; and Benny, a mouthy, hyperactive Korean kid who lives in the basement and works as a play tester.

Much of the show's humor comes from spoofing not only the video game industry, but Video Game Tropes as well. The animation style is entirely in 8-bit style pixel art (which resembles River City Ransom sprites), complete with status bars at the top and bottom of the screen that display absurd things depending on the action in the show (like a health meter that decreases when someone gets injured or killed, a "Douche" meter when Todd starts talking, question marks appearing when Larrity starts making bizarre comments, etc, etc.).

Sadly, Code Monkeys only lasted two seasons (2007-2008), with the first season on DVD; the entire series was available on Netflix (in the US) until 2014, and has recently returned via the new NBCUniversal streaming service Peacock (as the remnants of G4 are now administered by them via NBCU's acquisition by Comcast in 2009). The theme song lives on as the theme song for Film Master Adam's Review show. However, creator Adam de la Pena has dropped a hint about a potential return