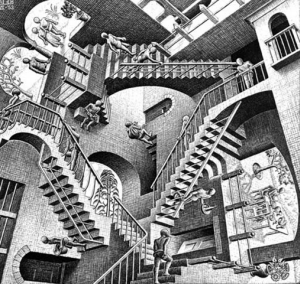 When a building is shown to have been built in a way that would either be impossible to build or is just plain ridiculous. Things like upside-down pyramids or buildings in the shape of something that is obviously not a building (for example, restaurants shaped like their signature food).

Can also apply to vehicles too. Compare Alien Geometries, Not Drawn to Scale, Benevolent Architecture, Malevolent Architecture, and Unnaturally Looping Location. Taken to the extreme, this can result in a man-made Eldritch Location. If looking for M. C. Escher, head on down to True Art Is Incomprehensible by way of the stairwell which goes upward until it loops on itself. Also note Zeerust, as the decades around the middle 20th century contain several prominent real-life examples.