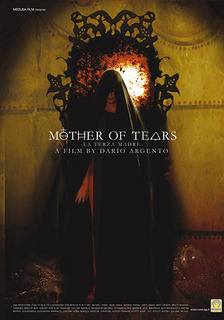 A 2007 film written and directed by Dario Argento and starring his daughter, Asia Argento and Udo Kier.

Workers excavating outside of a cemetery in Viterbo, a town near Rome, unearth an urn chained to the coffin of a medieval knight. The urn is sent to an art museum, where student Sarah Mandy and a friend decide to open it. This reveals a tunic belonging to a centuries old and long dormant witch known as Mater Lachrymarum, the Mother of Tears. The artifact restores the Mother's powers, bringing about a wave of murders, suicides and vandalism. As witches from all over the world flock to Mater Lachrymarum's side to witness the second fall of Rome, Sarah learns that her mother was a white witch, and that she herself may be the only one capable of stopping Lachrymarum's evil reign.

The third and final film in the 'Three Mothers' trilogy, following 1977's Suspiria and 1980's Inferno.