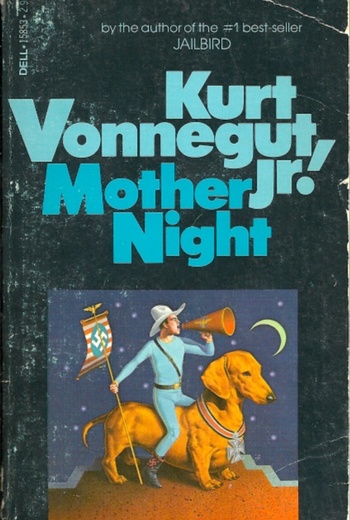 Mother Night is a 1961 novel by Kurt Vonnegut that tells of the life of Howard W. Campbell Jr., an expatriate American who moved to Germany with his parents shortly after World War I. Despite being an infamous Nazi radio personality and propagandist under Joseph Goebbels, Campbell is actually an author who writes sappy idealistic Medieval European Fantasy plays and spends all of his time obsessing over his wife; in actuality he has no interest in politics, the Nazi movement, its resulting World War II or anything besides his plays and wife. However, he's also a Double Agent under a minor division of the US and sends coded messages for reasons he doesn't even understand.note Several characters suggest he either did it out of his latent idealism, or more likely - he simply thought it was fun.

Continuing indifferently even following his beloved wife's death, Campbell soon finds the war over, and himself a war criminal. Left in New York City by his recruiters without evidence to prove his innocence, Campbell spends 15 years surprisingly happy in almost isolation with his only friend, George Kraft. This changes when a white supremacist newspaper, which publicizes Campbell's history and current life, makes his past and crimes resurface again, attracting the attention of Israel and a number of old enemies who want justice.

Made into a 1996 film directed by Keith Gordon (Back to School, The Chocolate War) and starring Nick Nolte, Sheryl Lee, and John Goodman. It's quite faithful to the source material.

Not to be confused with 'night, Mother.