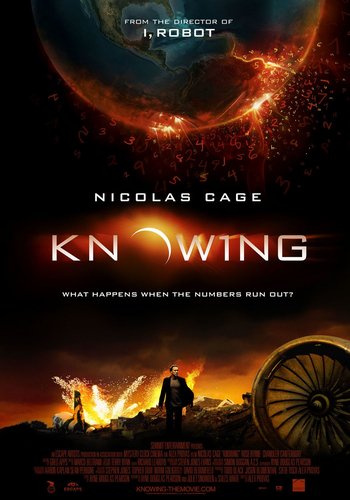 Are there things man is not meant to know?
"The numbers are the key to everything."
— Dr. John Koestler
Advertisement:

The film begins in 1959 with a girl named Lucinda Embry who is shown repeating seemingly random numbers. At the elementary school where she goes, her class makes a time capsule filled with various drawings and letters to the people of the future. Lucinda's contribution, however, is a piece of paper that simply has numbers written on it.

Fifty years later, the elementary school class of Dr. John Koestler's son, Caleb, opens up the capsule. Caleb finds Lucinda's piece of paper, taking it home with him, puzzled by the numbers. John begins obsessing over it, soon discovering the numbers are not random, but, rather, are the exact dates and death tolls of every major disaster in the past fifty years. These prove to be accurate for everything from hotel fires to 9/11. However, not all of these are for past events as there are a handful of predictions that haven't happened yet.