Revolvers Are for Amateurs 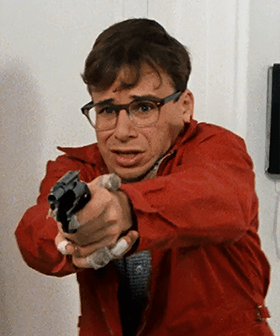 Just because someone is packing a six-shooter, that doesn't automatically make them Dirty Harry.
"Revolvers tend to be easier to use than automatics, especially for amateurs. Their mechanism is simpler, and it's easier to learn how to operate them, and you're less likely to make mistakes with them."
— Tamaru, 1Q84
Advertisement:

If a character who has little combat experience needs to kill someone or defend himself, chances are he's going to be packing a revolver, especially a snubnosed revolver, instead of a semiautomatic. The less advanced design, smaller ammo capacity, and the shorter barrel are a good visual metaphor for the character's vulnerability and inexperience in combat.

One reason for this is that revolvers are simple and reliable firearms compared with more modern designs. There's a minimum of moving parts compared to a semi-automatic, they are less picky about what ammunition they'll take, and they don't jam under normal circumstances, so they're lower maintenance and more reliable for someone who doesn't have a lot of experience with firearms in general. Revolvers on the whole are usually cheaper, and therefore something you're more likely to find on an amateur rather than a professional who has more money invested in his firearms. Additionally, because of their inherently simpler design, a low-end revolver will outperform a cheaply-made automatic pistol in a walk, making them all the more attractive to those on a limited budget.

It doesn't count for characters who live in a time where semiautomatic handguns were rare, unreliable, or non-existent, or for those who still venerate weapons from such periods as embodying the Good Old Ways. From The Wild West through World War II, revolvers were the default sidearm, but even as late as The '70s American police officers still relied on them over semiautomatics. It doesn't count for characters experienced in gunfighting who use small revolvers as backups to other, larger weapons or for easy concealment, nor does it count for characters who use a Hand Cannon, unless they're specifically called out as being out of their depth and unable to handle it.

See also Little Useless Gun, if it's the gun itself that's perceived as non-threatening, rather than the person holding it — there may be considerable crossover, of course.

Compare and/or contrast Revolvers Are Just Better, where someone who does know what they're doing decides to pack a wheelgun.