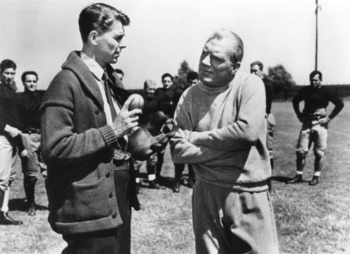 How could Ronald Reagan not be in the page illustration?
"Rock, some day when the team's up against it and the breaks are beating the boys, ask 'em to go in there with all they've got, and win just one for the Gipper. I don't know where I'll be then, but I'll know about it. I'll be happy."
— George Gipp
Advertisement:

It's a Biopic of legendary college football coach Knute Rockne (O'Brien), who built the Notre Dame Fighting Irish into a football dynasty. Rockne emigrates to America with his Norwegian family as a child, then as a young adult he works until he has enough money to attend the University of Notre Dame. Rockne plays on the football team as a receiver, and he and quarterback Gus Dorais popularize the use of the forward pass when they use it to upset Army in 1913.

Rockne graduates from school, shows promise as a chemist, and actually teaches chemistry at Notre Dame for a while, but his love for football eventually leads him to take the job of head coach of the Fighting Irish football team. Rockne builds the Irish, formerly a rather small-scale program, into a national power, and invents the "Notre Dame box", a highly successful offensive formation. One of his best players is George Gipp (Reagan), who becomes an All-American and a huge star before meeting a tragic end.

Ronald Reagan appears for only ten minutes and three scenes as Gipp, but became strongly associated with the character, even more so when he went into politics and people started calling him "the Gipper". Latter-day releases of that movie have Reagan featured much more prominently than the actual star, Pat O'Brien.