Hauled Before a Senate Subcommittee 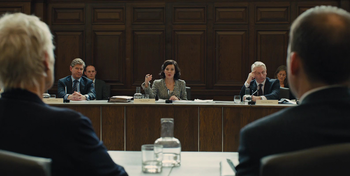 The United States Congress is one of the most powerful legislative bodies in the world. It has an oversight capacity that is quite simply huge and investigates pretty much every aspect of American government policy through a system of permanent and ad-hoc committees. These committees have the power to issue subpoenas and compel relevant officials to testify under oath. While most often rather boring and tedious for most involved, at times they've become high political theater, with some instances (HUAC, Watergate) becoming etched in modern history. Of course the members of the committee have a tendency to act like every last one of these committees is of the utmost importance.

Thus if they are at all connected to the government, our heroes can count on having to answer to Congress at some point or another for their actions. While matters such as government corruption, terrorism, or military operations are close to Truth in Television, you more likely will see congressional oversight committees dealing with everything from the undead to alien species.

Even when not in play directly, this trope may affect a work, as the bosses try to avert being hauled in for a hearing by sweet-talking some senator or representative. Most often the chair of the committee in question. So this is why you see a senator getting a guided tour of the Elaborate Underground Base. Just make sure the committee's head isn't in bed with a high-ranking executive of the company they are meant to be investigating. Or otherwise working with the villains.

Despite the name, this trope also covers investigations carried out by other legislatures, real or fictional. For example, the British Parliament has permanent Select Committees that investigate certain areas, including public accounts, hence this page's use of the committee hearing from Skyfall as the heading image. Some examples might not even be legislatures, as long as they concern the nominal governing body with a committee.

For obvious reasons, this is mostly an American and British trope, due to the way The Common Law works, something that it's very difficult to replicate in other legal systems.