Film / The Return of Captain Invincible 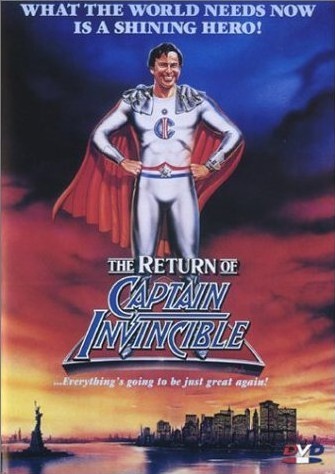 Captain Invincible was a superhero who won World War II single-handed. After the war he was tried for numerous offenses including supporting Communism (by fighting the Nazis...), impersonating a captain and showing his underpants. He walked out of his trial and vanished.

Years later when his evil arch-enemy Mr. Midnight once again menaces the world (or at least New York) with a dastardly scheme he is discovered living in a squat in Australia. Now a disillusioned alcoholic, can Captain Invincible regain control of his long-unused and erratic superpowers in time to stop this fiend and make the world safe again?

A musical B-movie comedy from 1983, starring Alan Arkin and Christopher Lee. Unrelated to the eighties British superhero-parody newspaper comic strip Captain Invincible, and definitely not to be confused with the superhero comic Invincible.