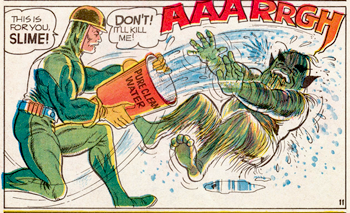 Dihydrogen monoxide claims yet another victim.
Metro Man: Copper... drains... my powers!
Megamind: Your weakness is copper? You're kidding, right?
— Megamind (He was.)
Advertisement:

Being a Super Hero ain't easy. Most of the original Flying Bricks have the good Achilles heels covered, and the pharmacy is even out of Psycho Serum to give you a cheap Backstory gimmick to explain your powers.

What's left for the modern hero and villain to do? Make do with a Weaksauce Weakness. It's great for comedic effect, but just as often it ends up being an Achilles' Heel that makes your average Mundane Solution seem perfectly reasonable by comparison.

The weakness isn't a common household cleaning agent like Mundane Solution, but something so incredibly, stupidly embarrassing you'd think the Super Hero would never use his power out of shame in the off chance someone found out about it, or because it shows up regularly in the course of their super heroing. The "weakness" might come in the form of the fuel for the super power, a humiliating Transformation Sequence or activation phrase, an Embarrassing but Empowering Outfit, or just a set of restrictions on the powers that really are begging to get laughed at. Therefore, this is one of the most popular ways to Bless your hero With Suck.

If the weakness is a Logical Weakness, it can be pulled off. If not, it can seriously stress the Willing Suspension of Disbelief, unless it's Played for Laughs.

Especially cruel writers will have clever villains make it a Weaponized Weakness. However, a Kryptonite-Proof Suit can even the odds.

This is also commonly exploited in an Easily Thwarted Alien Invasion, where Bizarre Alien Biology is probably to blame.

Related to Why Did It Have to Be Snakes? See also Kryptonite Factor, which is a weaksauce weakness for superheroes. If played for laughs, the one so harmed may Fight Off the Kryptonite. In extreme cases, the character will defend themselves from the weakness with a Cross-Melting Aura. For the inversion, of being at risk from a lack of something, see Phlebotinum Dependence.