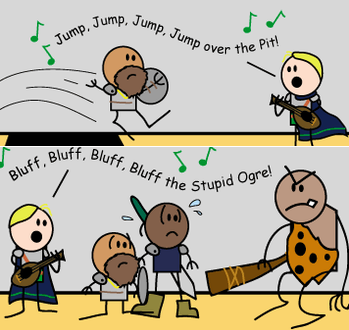 A group of people are going through a horrible time and they are about to let go of all hope and give in to panic or worse: They could be so deprived that they're losing their humanity.

But then someone starts to sing or play an instrument, a song that rises above the sounds of suffering and fear. And everyone raises their heads to listen, momentarily forgetting their suffering, remembering that there's more to life than this, that all hope is not lost, and that they're not animals. This can save the people from falling past the Despair Event Horizon and sometimes even the Moral Event Horizon in cases where the populace has started to turn primal, which may even put the musician's life in danger while he or she performs. The musician is the hero of this trope and is very much admired by his or her unfortunate public.

The song played will usually be Awesome Music, or appropriate in some other manner. The moment will usually be a prime contender for the musician's Moment of Awesome. It's not uncommon for it to be or be accompanied by a Tear Jerker.

This is pretty much what the Glamorous Wartime Singer exists for. Compare Survival Mantra, a related trope where words are used to shore up personal courage.

Compare Pep-Talk Song and "Gaining Confidence" Song. Contrast Fear Song, when someone sings about the things they're afraid of, and Theme Music Power-Up, where a song accompanies a specific person or group getting more powerful or doing something awesome but it is typically for the benefit of the audience. Also, Music Magic which is when music is used to invoke magical effects (which can include +1 courage style buffs).