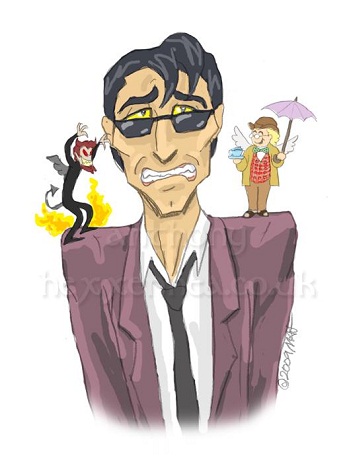 "Grrr, I am evil. And you suck." (art by Quantum Witch)
Don't Stop Believing...
"You gave me quite a fright, you did. Usually one person doesn't get hurt quite so badly, but you've always had to go above and beyond, haven't you? ...And you never visit anymore, and I can't believe you never mentioned your demon boyfriend."
— Raphael, to Aziraphale
Advertisement:

by JAMoczo is a very funny Good Omens Crack Fic / Action-Adventure / (non-explicit) Slash Fic in which Aziraphale is captured by Hell and Crowley, War and the Archangel Michael (on a Mission from God) break in to save him and set off a second apocalypse. It introduces entertaining characterizations of other angels such as Michael, Raphael (Aziraphale's adopted father), Gabriel, and Uriel. It's a self-parodying Affectionate Parody with many interesting twists and turns along the way.

(which is a sequel to Good Omens). Manchester Lost has a sequel, itself, which is complete: Paradise Thwarted

, and which now has its own page.