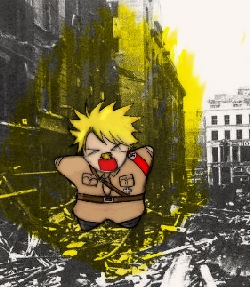 Hitler continued laughing, then finally said 'Goku! You came here expecting to find a madman, but instead, it was me, a GOD!' Hitler had become a super saiyan.
Anonymous Poster #1: Woody is stuck inseide Sunnyside with the gang, and has just had his arm torn off by Lotso. Luckily, a rifle through the confiscated items drawer and a bit of duct tape later, Woody has a new arm — a Swiss Army knife duct-taped to his shoulder, Ash Williams style. Now what shall he do with his new arm? Bonus points if you can get Ken to call Woody's new arm "groovy".
Anonymous Poster #2: I love you.
— An exchange from the

Fan Fic on crack. The easiest type of fanfic to write, and yet one of the hardest to write well. Crack Fics are not merely humorous; in fact, in many cases, it doesn't have to be humorous. While it's similar to Alternate Universe Fic in that they both change some fundamental aspect of the source material, the "something's different about this" idea is taken to the extreme. In its broadest sense, a Crack Fic is any story whose premise and events would be completely implausible in Canon. These frequently include bizarre settings and explorations of improbable relationships between characters — not merely unlikely in canon, as in Foe Yay Shipping, but totally irrational and turned up a notch beyond that, as in Crack Pairing.

A Crack Fic is often considered the result of a challenge, either from someone besides the author or from the author themselves; "this idea is completely unworkable, but I bet I can make it work." The name stems from the notion that the author must have been ingesting some illegal substance just to think up the idea, let alone write it.

Our very own Pitch Generator