The Only One Allowed to Defeat You 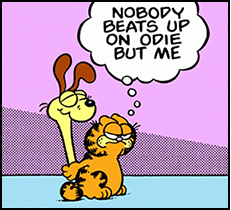 "Nobody kills my wingman but me!"
— The Joker, Batman: The Brave and the Bold
Advertisement:

One person or group considers another person or group as their rival, and will not allow anyone else to be the one to defeat them. This can sometimes lead to them helping their rival against other enemies, justifying it with a lame excuse, to make sure that they survive until the final battle between the rivals. Sometimes, this trope can become the basis of a Heel–Face Turn. It also frequently leads to a "Not So Different" Remark and Antagonist in Mourning.

This is also the one-sided obsession of the Unknown Rival. It's also (usually) a big no-no on the Evil Overlord List (see #117).

This may be motivated by respect given to a Worthy Opponent. It can lead into Foe Romance Subtext if this excuse is used too much and opportunities to defeat the rival are not taken.

In some cases it can simply be fueled by pure pride, as a more egotistical villain will find the mere thought of someone else taking credit for a goal he has worked so hard for utterly insufferable. See also It's Personal, which is a recurring reason for this trope to come into play, especially for a villain seeking Revenge.

Compare Only I Can Kill Him, for where the character in question really is the only one who can defeat the rival. Also compare Leave Him to Me!, Hypocritical Heartwarming. Sometimes this is the reason behind Secret Identity Apathy.

Nigel Wants Blu For Himself

Nigel prevents Big Boss from attacking and killing Blu so that he can do it himself.

Nigel Wants Blu For Himself

Nigel prevents Big Boss from attacking and killing Blu so that he can do it himself.