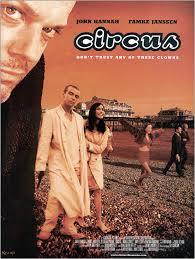 Don't trust any of these clowns
Advertisement:

Bruno, a sadistic criminal, wants clever con man Leo out of the way. Leo and his equally clever wife, Lily, are up to something. So too is Julius: he hires Leo to kill Gloria, Julius's wife. Leo does it, but then Julius shows up with the murder on tape, saying Gloria isn't his wife - it's blackmail. Leo's bookie, Troy, is also closing in, wanting to be paid. Bruno and Lily as well as Bruno and Julius have their own scams running, and Leo is their target. Maybe Leo can get Troy off his back, avoid Moose (Bruno's huge enforcer), send Gloria's corpse out of England, turn the tables on Bruno's murderous brother Caspar, and outfox Lily. Or is Lily his fox? It's a three-ring circus.