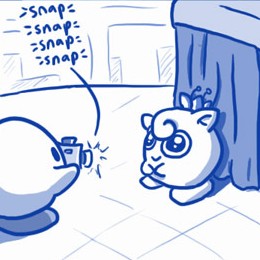 Since humans first discovered they could smear things on walls to represent things, we have had visual images. From cave paintings, to Renaissance paintings, to pencil drawings, to photography in 1827 with the very first photograph, to pixel art, these are the oldest two forms of visual works.

These tropes apply to anything related to creating still images, whether it be family photos, magazines, comics, etc.