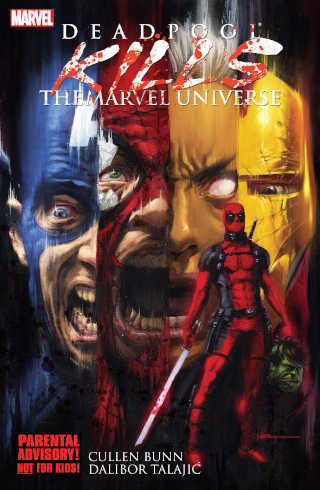 He won't rest until he's killed the entire Marvel Universe... Because you demanded it. Still funny? Eat your heart out, Frank!
What if everything you thought was funny about Deadpool was actually just disturbing? What if he decided to kill everyone and everything that makes up the Marvel Universe? What if he actually pulled it off? Would that be FUN for you?
Advertisement:

Deadpool Kills the Marvel Universe is a four-part elseworld story in which an alternate version of Deadpool, caught by the X-Men, is taken to Ravencroft Asylum and put under the care of a psychiatrist named Dr. Benjamin Brighton. But, unknown to the heroes, Benjamin Brighton is in reality the microverse villain Psycho-Man in disguise, who is using his position to break the villains under his care so he can shape them into his own private army.

Unfortunately, his process works all too well and Deadpool loses the wacky voices in his head, only for them to be replaced by a single new one in a crimson box, a bloodthirsty one that sends him on a new one-man war against the Marvel Universe. And in this war, no one is safe.

The series spawned two direct sequels, which form the "Deadpool Killogy." Deadpool Killustrated follows the same version of Deadpool after murdering his way through dozens of alternate Marvel universes. He decided to go a little deeper and start hunting down the classics of literature: Dracula, Tom Sawyer, Moby Dick, Captain Ahab, and more. After that, there's Deadpool Kills Deadpool, in which this version, which we're calling "Dreadpool", hunts down the other versions of Deadpool, including the mainstream Marvel Universe Deadpool.

Not to be confused with The Punisher Kills the Marvel Universe, which doesn't have as high a death toll. Not that it was hard to outshine Frank, anyway

In July of 2017, due to the original series having consistently high sales, the same creative team as the original reunited for Deadpool Kills the Marvel Universe Again, a five-issue miniseries where Deadpool is once again on a rampage. This time, it's due to a group of villains brainwashing him, so he immediately goes into a deluded killing frenzy whenever he hears a particular activation phrase.