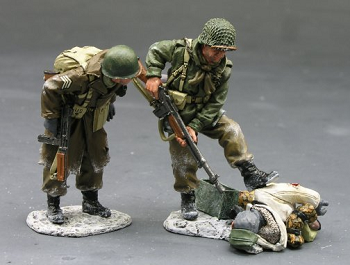 A doctor gets a phone call from his best friend, and the frantic voice at the other end says "God, oh God, my wife's dead! I shot her! What do I do!?" The doc tells his friend to calm down. "OK, now the first thing is, you have to be sure that she's really dead." He hears silence at the other end, then a single gunshot. "OK, that did it. What next?"
— Old joke
Advertisement:

When a character defies No One Could Survive That! by making sure the dead person stays dead. Can be done with bullets (sometimes lots of bullets or special types), fire, explosives (sometimes a volley of it, or rarely, a nuke), molecular disintegration, or a wooden stake, depending on what's available. This is the most effective way of dealing with a Zombie Apocalypse, assuming you can disable the victim in the first place and that you can find the body afterwards.

One of many calling cards for the No-Nonsense Nemesis. Justified version of Desecrating the Dead; related to There Is No Kill Like Overkill and Rasputinian Death (if it's only the subsequent attempts that work). Failure to do this causes a response similar to Why Don't Ya Just Shoot Him? (in this case, Why Don't Ya Just Shoot Him Again?). The Double Tap to the head is a common method of ensuring someone is really dead. A kill may be confirmed to someone else via Decapitation Presentation. In settings where resurrection is possible, this trope can overlap with Deader than Dead.

Very much a Truth in Television trope. It's common military doctrine in industrialized nations to aim for vital areas with techniques such as the Double Tap when shooting to kill. It's just as common in both the military and law enforcement for fallen opponents to be checked for signs of life before being officially declared KIA.

You know the deal; it's a Death Trope, possible spoilers ahoy!