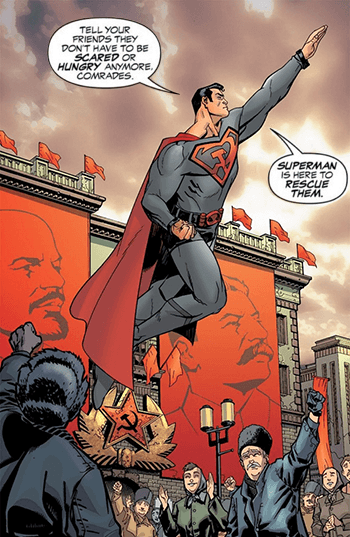 Truth, justice, and the Warsaw Pact.
"This is an imaginary story. Aren't they all?"
— Alan Moore, Whatever Happened to the Man of Tomorrow?
Advertisement:

A Sister Trope to the For Want of a Nail episode. While For Want of a Nail explores another fork in the road taken by a character, an Elseworld takes a well-known character and plonks them into a potentially wildly different location and situation. This can add some freshness to a character which allows them to act a different way than normal canon might allow but may also become an excuse to write professional Transplanted Character Fic of the Recycled IN SPACE! variety.

Daring writers trusted by loyal fans may do this kind of episode without any warning or explanation. Well regarded elseworld stories generally involve 1) either keeping the characters and their motivations recognizable despite the new setting and situations or 2) working within the confines of the new setting in order to get back to the original premise in a reasonable way.

Comes from the term used by DC Comics for these kinds of stories; they publish one-shots and Mini Series like this. Compare to Alternate Continuity. If a show is all Elseworlds all the time, you've got a Commedia dell'Arte Troupe.

DC's Elseworlds are sometimes grouped into six categories. These categories can be applied outside of DC Comics, of course.

In fanfiction, this is a type of Alternate Universe (or AU), where the characters generally remain the same but the setting changes. High school AUs are very popular, probably because many of the writers are themselves in high school. (On This Very Wiki, we use a broader definition of Alternate Universe, of which Elseworld is a subset.) See also Alternate Reality Episode, which can overlap.

Not to be confused with the video game Elsword, or the 2018 Arrowverse crossover Elseworlds, which deliberately invokes this trope.

What if Superman grew up in Germany instead of America?

What if Superman grew up in Germany instead of America?