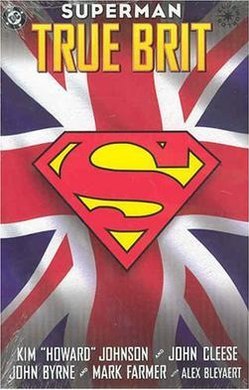 Superman: True Brit is an Elseworld Superman story by John Cleese and Kim Howard Johnson, with art by John Byrne and Mark Farmer.

It humorously speculates on what could have happened if Kal-El had been raised in England rather than Kansas.

Compare Superman: Red Son, which shows what could have happened if Supes had been raised in the USSR instead.