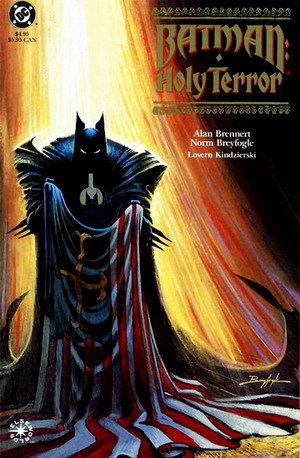 Batman: Holy Terror is an Elseworld story, one of DC's first official forays into the genre, written by Alan Brennart and drawn by Norm Breyfogle.

On an alternate Earth where Oliver Cromwell lived another ten years and the Commonwealth of England spread to the Americas, creating a brutal theocracy, Bruce Wayne launches a crusade of his own to avenge his parents, who were killed by the government.

Not to be confused with Frank Miller's Holy Terror, which was originally going to be a Batman story titled Holy Terror, Batman!.