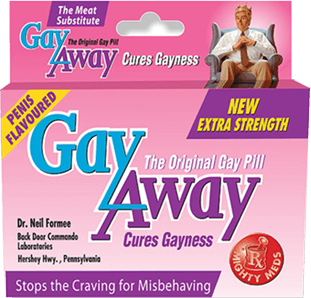 But I wanted to be happy!
Bart: Mr. Smithers? I thought you were, you know — uh.
Smithers: Haha, no, I'm straight — as long as I take these injections every ten minutes. [injects himself] I LOVE BOOBIES!
— The Simpsons ("Future-Drama")
Advertisement:

The occurrence in fiction of effecting a cure for, or attempting to cure, homosexuality.

Whether the homosexual character being "cured" is male or female and how they're cured, depends more on when the work was written than on anything else. Before about 1970 (and dating so far back that it's Older Than Steam) lesbianism was thought of not as an active attraction to women but as a neurotic, unhealthy rejection of men or even of sex entirely ("sex" at the time being thought of as all about men). For this reason, a lot of "cures" involved the woman finding a good man, or even a bad one (in that a lot of times the "cures" for lesbians were basically rape). Gay men's homosexuality was seen as a deeper-rooted psychological problem, often due to supposedly over-indulgent mothers (a popular cause for all sorts of ills at the time). It's only in the past 30-40 years that the idea of male and female homosexuality having a similar cause and "cure" has come about and been shown in media.

There are many variations on this theme, ranging from outright genetic reprogramming to just having sex with a member of the opposite sex. May draw on the Rape and Switch trope, in which homosexuality is a defense mechanism triggered by unwanted (and unpleasant) sexual contact.

Once quite common, this trope is increasingly becoming a discredited one due to homosexuals, in general, being moved to the realm of Once Acceptable Targets as well as some cathartic backlash against the once common idea of "curing" homosexuality. There is also the growing body of research showing that homosexuality is likely to have a biological cause, and attempts to "cure" it with psychotherapy or other non-medical techniques are not only usually ineffective but can often be dangerous, and the rejection of this trope by all major medical and psychological organizations such as the American Psychiatric Association. Especially as it can raise the suicide rate of its 'patients' up to 10 times the population average. It is now illegal to subject minors to this in California, with other states following suit; additionally, conversion therapy has been found to be a violation of state consumer-protection laws (essentially, false advertising/fraud, or in trope terms, it's pure snake oil) in New Jersey (following a 2015 verdict), which likely portends similar findings elsewhere in the US at least (most states' consumer protection laws are worded very similarly).