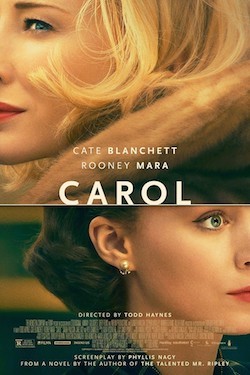 Carol is a 2015 British-American romantic drama film directed by Todd Haynes, from a screenplay by Phyllis Nagy based on the novel The Price of Salt (also known as Carol) by Patricia Highsmith. The book was originally published under the pseudonym Claire Morgan due to its controversial nature at the time.

The film stars Cate Blanchett, Rooney Mara, Sarah Paulson, and Kyle Chandler. Set in 1952 in New York City, the film tells the story of a young aspiring photographer and her relationship with an older woman going through a difficult divorce.

Compare with Desert Hearts, another lesbian romance adapted from a novel and set in the 1950s.