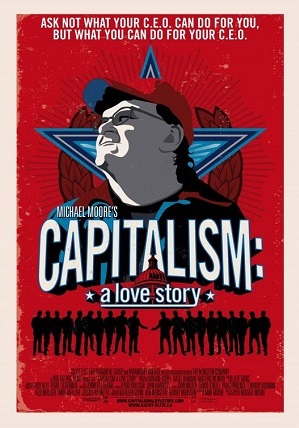 "This is Capitalism. A system of taking and giving... mostly taking."
–– Michael Moore
Advertisement:

Capitalism: A Love Story is a 2009 documentary, by Michael Moore. Twenty years after attacking General Motors' anti-worker policies in Roger & Me, Moore documents what he believes to be the detrimental role that Neoliberal-Neoclassical policies and big business play in our lives, how they caused the Great Recession, and how it will take people demanding change, and not compromising or giving in, for anything substantial to upset the status quo.